Simon Rogan recently earned the title of ‘one of the most innovative chefs in the country’ (The Guardian, 2014).  Fera, meaning ‘wild’ in Latin, certainly reflects Rogan’s unique culinary style.  Renowned for his locally foraged and seasonal ingredients, Rogan’s menu brings together an unusual blend of textures and flavours.

The meal began with an amuse-bouche: a chickpea wafer topped with blue cheese foam, a dash of elderberry and wild petals.  These delicate flavours colluded fittingly, and the wafer had a nice crispness to it. 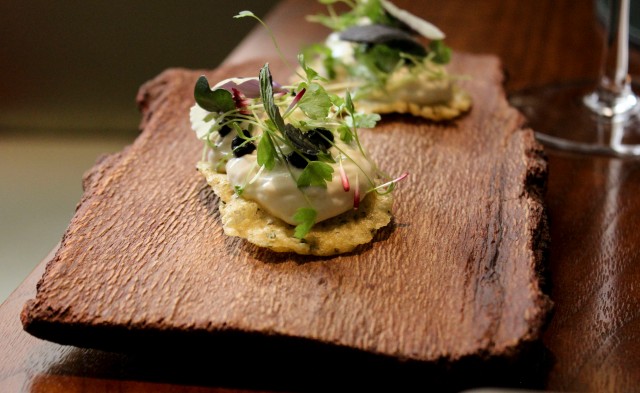 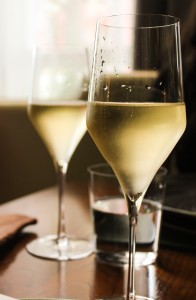 This was followed by a slice of warmed stout bread served with Cumbrian butter.  The bread had a soft centre and firm crust, and a slight bitterness. 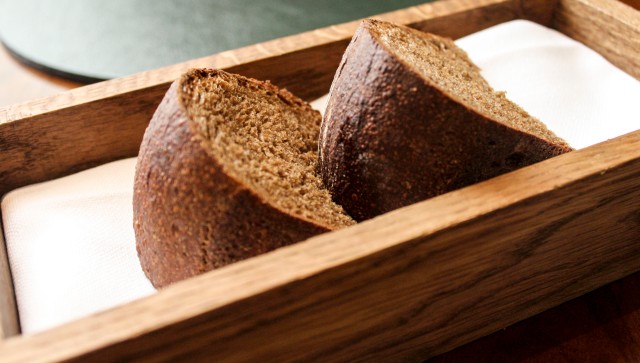 The set lunch menu offers enough variety.  To start, I had the cured salmon with pickled mushrooms.  The plate brought together an interesting blend of flavours, and was wonderfully presented, though the portion was slightly sparse.  The stylistic unity of each plate accentuates the enchanting experience that Rogan creates.  My friend, Sajni, had the ‘Grilled Salad’, comprised of vegetables cooked using Rogan’s signature ‘smoking’ technique, to produce a truly unique type of salad.  This was drizzled with truffle custard which enhanced the smoky flavour.

For the main course I sampled the Cornish cod served with gem lettuce hearts and leaves, and jersey pearls.  The sauce tasted fresh, and complemented the cod well.

The celeriac main was served with a range of vegetables.  The pickled beetroot worked well with the earthy celeriac.  Although tasty, the mains could have been slightly more filling, or at least served with side dishes. 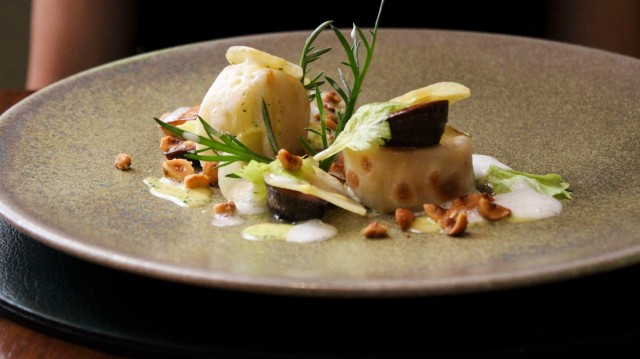 We ended the meal with some herbal teas and petit-fours.  The presentation was exceptional – the teas were served with an hourglass that ensured the perfect brew.  The mint leaves in my tea were especially fresh. 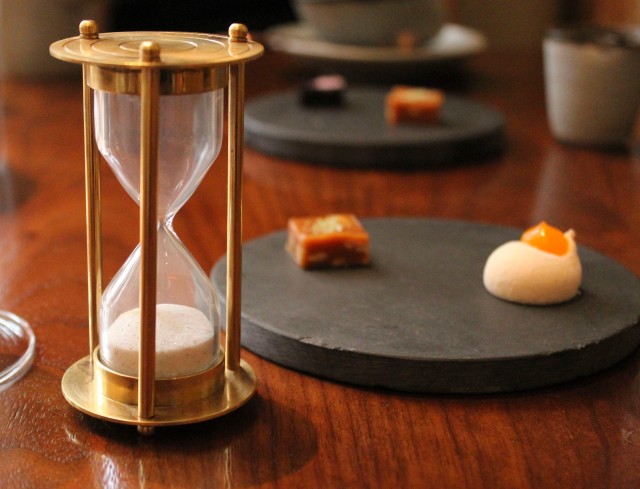 The service was great, the staff were very attentive and welcoming and were knowledgeable about the menu.  My only grievance would be my communication with the restaurant prior to arrival.  The restaurant requires a credit card to confirm your booking, but it was extremely difficult to speak to anyone by phone, and emails offered confusing and conflicting information about the cancellation terms.

The set menu was definitely value for money, considering all the added extras in between. Fera’s clientele ranges from couples, to business-people.  It is definitely worth trying at least once, however, the atmosphere lacks a certain vibrancy that would encourage people of my own age group to visit repeatedly. Having said this, one cannot fault the presentation, technical ability of the chefs, and Rogan’s intriguing menu which is unlike any other.

Fera is exactly what you’d expect of a fine dining restaurant, offering class and elegance in décor and service, along with high-quality ingredients.  What distinguishes the meal from other restaurants of similar calibre is the unifying theme based on a close affinity to nature, offering a unique dining experience that was consistent throughout the food, décor and atmosphere. The dishes were often served on creative crockery, for example, a bowl mimicking the design of a tree bark.  Rogan is the most notable exponent amongst a broader culinary movement, where chefs seek to use their plates as a means to tell the story of the nature that surrounds them – a concept that is particularly favourable in Northern Europe.  The irony of a ‘farmer-forager’ from up north being responsible for running the restaurant at the paragon of British establishment and tradition is often noted by critics – but Rogan has certainly proved his excellence.

‘The best pub in Hertfordshire’

The Gate is my favourite pub of all time.  It is exactly what you could expect of a great English pub: delicious food, a cosy, relaxed atmosphere, and exceptional service.  Having been a regular visitor for the past 10 years, I can safely say that the food quality is always consistently excellent.   I have never had a bad meal.

The Gate is situated in the leafy suburb of Arkley.  Its recent renovation has only improved the décor, to make one feel at home.  Features such as a warm fireplace, the odd bookshelf, exposed wooden beams  and wall paintings create a cosy, homely environment perfect for a cold winter’s evening.  Conversely, during the summer their garden area provides the perfect space to relax with a cool drink.  The service is exceptional: the staff are friendly and polite and you won’t have to wait too long for your food. 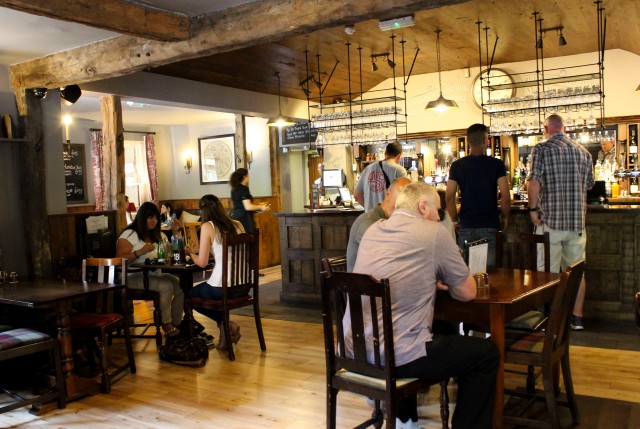 The menu features ‘traditional pub grub’ including fish and chips or a steak and ale pie, alongside a wide variety of other meat, fish and vegetarian dishes to suit all tastes.    Look out for their ‘blackboard specials’ which regularly change.  The portions are large and filling and are definitely value-for-money. Having sampled most of the items on the menu I can safely say that whatever item you chose will be enjoyable, as all food options are consistent in their high quality and taste, and always served at the perfect temperature.  A must-have dish is the breaded mushrooms to start, served crispy and warm alongside garlic mayonnaise.  For any chip-lovers, I would definitely recommend their chunky chips that are served with many of the main course dishes.  The restaurant is family friendly, with an excellent children’s menu.

Unfortunately, bookings are not available, and the restaurant can get very busy at peak times during the weekend, so it is best to arrive early for dinner. However, if there is a wait for a table you can always enjoy a drink by the bar in the meantime.  The pub has a small car park, though this can get full very quickly during peak periods, however, parking is available on Barnet Road just outside the pub, if the car park is full.

Overall, I can wholeheartedly recommend a visit to The Gate.  It is the perfect setting for all occasions, a  family meal out, or a dinner with friends.  The food, service and ambiance all contribute to a fantastic dining experience, and it is always a reliable treat.

The Terrace Grill and Bar at Le Meridien Hotel, Piccadilly is one of my new favourite London restaurants.  Its décor is sophisticated and spectacular; a sun filled, spacious glass terrace overlooking London’s Piccadilly, with a modern yet relaxed vibe making it a perfect place to dine.  A seat by the window is ideal, since the restaurant overlooks London’s Piccadilly.

I visited the Terrace Grill and Bar for lunch as a 21st birthday treat from my good friend Tania.  The restaurant is renowned for its meat and fish grills, however there are options available for vegetarians too. The menus vary slightly between lunch and dinner; I assume that the high quality of food carries through to dinner as well.  Every dish we sampled was cooked to perfection, extravagantly presented and fairly light, making a three course meal easily consumable.

To start, I ordered the confit chicken, which I can safely say is one of the best starter dishes I have ever had.  The chicken was moist and well complemented with the chutneys that dressed it.  Tania ordered the squid, which was served with a side of mango relish. Both blended together perfectly.  (photos of starters)  For our main course I ordered the chicken breast with chive mash from the Market Menu (which changes regularly) and Tania had the grilled lemon sole, which was lightly seasoned which allowed for the true taste of the lemon sole to prevail. 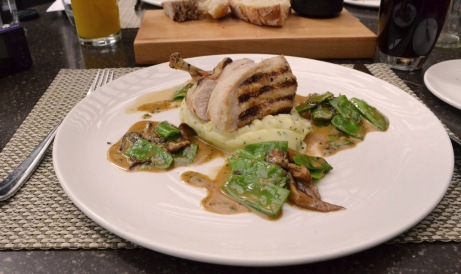 The deserts were fantastic, refreshing and light.  I had the chocolate tart which was served with a scoop of ice cream and Tania had the lemon syllabub.  Both were extremely enjoyable, (high praise coming from someone who doesn’t usually have a sweet tooth!) 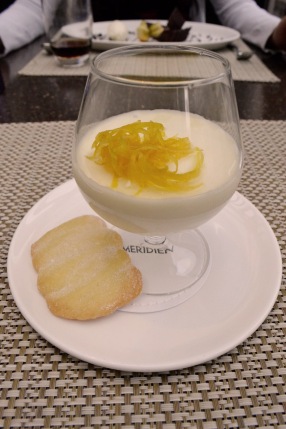 The staff were friendly and attentive, contributing to the extremely enjoyable dining experience we had.  When we visited, the restaurant was fairly quiet, however, we were informed that crowds do start to appear around dinner time, therefore booking in advance would be a good idea, to avoid disappointment.  The dress code could be described as smart-casual and the restaurant would be a nice place to visit for a special occasion. I would definitely recommend the Terrace Grill and Bar since their food, service and ambience was exceptional.