I had been itching to try the Breakfast Club for a while.  I was eager to sample the famous breakfast heaven with queues literally coming out of the door and down the street.  The day I visited was no exception, we had to queue for 30 minutes (even on a weekday morning!)

When I entered the restaurant, I realised why this was the case;  the restaurant is quite small, with perhaps only 15 tables.  The décor is quirky: with a pinboard scaling the inside wall that guests can pin messages, postcards or almost anything really, to.  This, combined with fairy lights on the wall and coins glued to the rim of the bar, can create an alternative brunch experience. 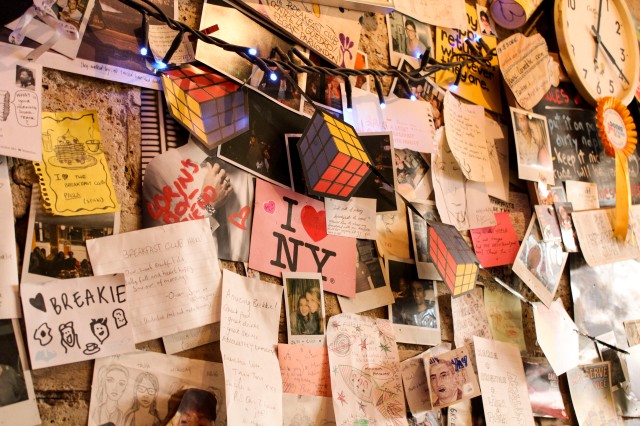 The restaurant’s theme is carried through to all aspects, including bespoke ‘Breakfast Club’ mugs, for example. All in all the vibe is fairly casual and relaxed.

The breakfast and brunch menu is wide ranging, featuring British and American classics as well as some more unusual additions such as the falafel wrap.  I ordered the Veggie All-American which was served with Pancakes with maple syrup, scrambled eggs, one veggie sausage, mushrooms and home-style fried potatoes.  The portions were very large, and therefore quite good value for money.  The potatoes were tasty, as were the mushrooms and eggs, however, the food overall was quite oily. Although I cannot fault the food to any large degree, I have had better breakfasts’ elsewhere in London, and food presentation could be improved.  I also ordered a cappuccino, which was strong and bitter.

My friends ordered the Pancakes and Berries, which were served with maple syrup and whipped cream.  Again, their feedback indicated that although the meal was enjoyable, they had tried better pancakes before.

The service was good.  The staff were friendly. Customers should be prepared to queue for up to an hour, as the restaurant does not take reservations at certain times of day.   The Breakfast Club is part of a chain with several branches across London.  I, personally visited the Soho branch. In addition to breakfast and brunch, the Breakfast club is also open for lunch, dinner and drinks.

Overall, I’d recommend visiting the Breakfast Club for the experience and atmosphere, rather than the food.  Perhaps the lengthy queues and popularity of the restaurant had heightened my expectations, but  the food was fairly average and therefore does not have much repeat value, which was the general consensus amongst the girls and myself.

Dinner at the @whitehorseharpenden - a lovely little pub in Harpenden with a cute garden with lots of outdoor seating and really great food. I saw chicken goujons on the menu and obvs had to order them - 10/10, better than McNuggets and on par with the Burger King chicken tenders. Crispy and flavoursome on the outside and not too oily just how a great chicken nugget should be 👍🏽
Madhus at @thegrovehotel 😋 a few weeks ago I visited this pop up Indian restaurant run by @madhusofficial - they’re fine dining Indian caterers and the food was soooo good 😍 highlights include the paneer tikka (straight out the tandoor and you can tell) and the Palak Patta Chaat with samphire and crispy battered baby spinach dressed with chutney 🤤 they have a tasting menu at £60 pp, it sounded amazing but I doubt I would have survived 6 courses of Indian food 😅 so we went for the a la carte. The grove hotel is super nice as well so it’s great for a special occasion. They’re only around till the end of summer, would highly recommend!
The delightful @stuffed.ravioli from @netilmarket 🤤 I went for the ravioli stuffed with ricotta and topped with cacio e pepe butter and lemon breadcrumbs 😋 was delicious! This was part of a food tour me and my bestie did round Hackney, there’s so much good food 😍 we picked up pastries from @pophamsbakery and ice cream from @hackneygelato and walked along the Regents Canal to Victoria Park. Such a fun day out 😎☀️
My favourite summer pub ☀️ @theoldorchardharefield has amazing food and amazing views. Lots of outdoor seating as well. Just look at those fish and chips 😍 (about an hour outside london but worth the trek)
Very excitingly, I did a cooking class with @karancooks and the @jamieolivercookeryschool this week! I love @hopperslondon and Sri Lankan food so I’m glad I can now finally make it at home. We made:
Dinner at @terraterrauk - one of my new fave restaurants! They have a super pretty terrace and amazing Italian food. I went for the